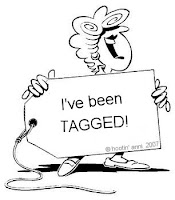 Kristi tagged me with listing 7 random things that you don't know about me. The rules are to share seven things, and then tag 7 others, and visit their blogs and leave a comment so they'll know they've been tagged. Okay, before I forget to do this ..... here goes:

1) When I was little I had extremely curly hair. Worse than Shirley Temple! My sister, as most big sisters, would tease me and say I was found in a cabbage patch. Little did she know that years later cabbage patch dolls would become a sensation!


2) When I was very little I told my parents I was running away from home. I didn't run far though, I hid in my grandmother's bedroom!


3) Before my husband and I moved into our apartment, our daughter and family lived with us. Not too bad, right? Well, we also had 4 dogs, 2 cats, 3 birds, and a snake! Yes, there were 5 humans and 10 animals! Not anymore!!!!


4) Due to my chemical sensitivities and autoimmune diseases I am "allergic" to the sun. I get a rash and become very ill when exposed for more than 10 minutes. God's sense of humor..... we minister in Phoenix Arizona... called the Valley of the Sun!


5) For three years I was the bookkeeper for a dental office. Two of the doctors were quite special. One was the son of the head of the mob, and the other was the son of the sheriff! Let's just say my family and I were very protected!!!


6) I used to be thin growing up. Oh for those days again! Well, just to be thin again.


7) I never wake up grumpy! My husband gets up all by himself! lol

Now I get to tag 7 people. I'm going to tag: Anyone who wants to do this. Make sure you leave a comment in my post so I can read what you wrote.
Posted by Michele Williams at 12:18 PM

Email ThisBlogThis!Share to TwitterShare to FacebookShare to Pinterest
Labels: About Me, Funny, Tag

And what am I buying for Savannah's first birthday? Her first Cabbage Patch baby!

Sometimes I wake up grumpy. Other times I let him sleep!

Have a good weekend, sis. Love you.

I'm finally checking back in! I loved your post. My, you were protected at work. Thanks for playing along. You are such a blast!