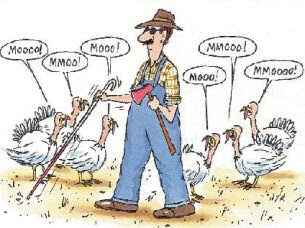 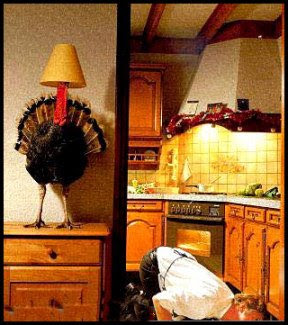 A Piece of Pumpkin Pie?
Jolene was only 8 and lived with family in the country with her parents and brother. Consequently they did not often have visitors from the city. One day Jolene's mother said that father was bringing two guests home for Thanksgiving supper.
After they had enjoyed the turkey, Jolene went to the kitchen to help her mother, and proudly brought in the first piece of pumpkin pie and gave it to her father. He then passed the plate to a guest. When Jolene came in with the second piece and gave it to his father, he again gave it to a guest.
This was too much for Little Jolene, who blurted out, 'It's no use, Daddy. The pieces are all the same size.'


Funny Thanksgiving Trivia - Turkey Weather Report
Here is Will and Guy's climate report for Thanksgiving Day in general, and for turkeys in particular.

Early Morning Thanksgiving Day
The temperature of turkeys will gradually rise throughout Thanksgiving day. However, at dawn when the birds stare at the frost in their chiller compartment, the ambient temperature may only be 10 ºF.

By 10 o'clock the turkeys will start to thaw as they see the light of day. At about 11 o'clock a warm Chinook wind from the fan oven will raise their temperature rapidly to 200 ºF.

Mid-day Heat
By 12 o'clock the cook's temperature may well reach fever levels. Furthermore, you may also notice an increase in humidity especially in the kitchen. In these turbulent conditions, Moms may be surrounded by an area of high wind-chill, the result maybe a cold shoulder for you. Beware, pestering one's mother too much may lead to a tornado in the kitchen.

Afternoon Forecast
By about 2:30 pm the warm weather condition will have stabilized, and as a result the turkey will have tanned nicely. Now a steel carving knife will cut across the bird's flanks, and slices of turkey will descend on the guests' plates.

A precipitation of cranberry sauce and mashed potatoes will make the plates slippery. You may also experience a gentle drizzle from the gravy boat. This should also be accompanied by a heavy fall of a lighter liquid into your wine glass.

Evening Rumble of Thunder
Pressure may increase drastically around the waist band, consequently, storm warnings have been issued about indigestion. The evening will see the turkey diminishing to leftovers that can then be distributed to all the guests. As the day draws to a close you may experience turbulent conditions in the stomach. Good news, the outlook is that by the weekend the rumble of thunder in the intestine will pass by the weekend.

Thanksgiving RiddlesWhere did the first corn come from? The stalk brought it.
Why did the Indian chief wear so many feathers? To keep his wigwam.
What happened to the Pilgrim who was shot at by an Indian? He had an arrow escape.
How did the Mayflower show that it liked America? It hugged the shore.
Which side of the turkey has the most feathers? The outside.
Can a turkey jump higher than the Empire State Building? Yes - a building can't jump at all.
◊

A young man named John received a parrot as a gift. The parrot had a bad
attitude and an even worse vocabulary. Every word out of the bird's
mouth was rude, obnoxious and laced with profanity. John tried and tried
to change the bird's attitude by consistently saying only polite words,
playing soft music and anything else he could think of to "clean up" the
bird's vocabulary. Finally, John was fed up and he yelled at the parrot.
The parrot yelled back. John shook the parrot and the parrot got angrier
and even ruder. John, in desperation, threw up his hand, grabbed the
bird and put him in the freezer. For a few minutes the parrot squawked
and kicked and screamed. Then suddenly there was total quiet. Not a peep
was heard for over a minute. Fearing that he'd hurt the parrot, John
quickly opened the door to the freezer. The parrot calmly! Stepped out
onto John's outstretched arms and said, "I believe I may have offended
you with my rude language and actions. I'm sincerely remorseful for my
inappropriate transgressions and I fully intend to do everything I can
to correct my rude and unforgivable behavior." John was stunned at the
change in the bird's attitude. As he was about to ask the parrot what had made such a dramatic change in his behavior, the bird continued,
"May I ask what the turkey did?"

HAPPY THANKSGIVING!
Posted by Michele Williams at 4:45 AM

Thanks for sharing these funnies.

You had a bunch today...Funny! I still love that turkey lamp! priceless!