What Are You Learning? 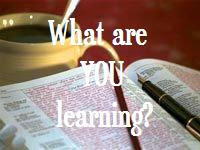 During this time I will share a study series from Women of Faith: Receiving God's Love, that my grandson gave me for Christmas.

To find out more about the meme: What are You Learning?, please visit here


“What joys for those you choose to bring near; those who live in your holy courts. What joys await us inside your holy Temple.” Psalm 65:4 (NLT). He chose us to us near to Him. I am so glad to know we have a God who wants to be near to me.

“Blessed is the nation whose God is the Lord, the people. He has chosen as His own inheritance.” (Psalm 33:12 NKJV) Those God has claimed for His own are blessed. God blesses me beyond measure!

“Just as He chose us in Him before the foundation of the world, that we should be holy and without blame before Him in love.” (Ephesians 1:4 NKJV). God made His covenant with Abram, and chose his descendants to be His own people. But before Abram became Abraham and Israel became God’s children, before the very foundation of the world were established, God chose us! He chose me! Before the universe was in existence God chose me! It's so hard to wrap that thought around my tiny brain... but I am so glad he has chosen me to be His own.

“God has chosen the foolish things of the world to put to shame the wise, and God has chosen the weak things of the world to put to share the things which are mighty.” 1 Corinthians 1:27 (NKJV). We may not always feel like it, but we are exactly who God says we are. If He says we’re a chosen generation and a royal priesthood, don’t argue! But God also knows that we are weak and foolish. He’s chosen us to put the wise and the mighty to shame. In spite of our imperfections, He will gain glory. I am so thankful that even though I am weak, and many times foolish, God can still use me for His purpose. Praise God!

“He is Lord of lords, and King of kings; and those who are with Him are called, chosen faithful.” Revelation 17:14 (NKJV). Isn’t it nice to think that we’ll be among those who will be known as His – the called, the chosen, the faithful.

“You are My servant I have chosen you and have not cast you away.” Isaiah 41:9 (NKJV) Praise God that there is nothing that we can do that can cause God to cast us away. We are His forever and ever Amen!
Dear gracious Heavenly Father, I am so thankful beyond words can ever express that you have chosen me to be your daughter! That even with all my imperfections and foolishness you love me, forgive me, and use me to further Your kingdom. Thank you Father that you will never ever toss me away. I am Your forever and ever Amen!
Posted by Michele Williams at 12:24 PM

Email ThisBlogThis!Share to TwitterShare to FacebookShare to Pinterest
Labels: Christian Life, Spiritual Health, What Are You Learning

It is wonderful to think that we’ll be among those who will be known as His the called, the chosen, and the faithful.
Praise my wonderful God, that there is nothing that I can do that can cause God to cast me away. I know there would be alot lost out there if they thought they would not be forgiven and go to heaven. But he will never leave us nor forsake us, Praise God
Great post
Have a blessed weekend.
Huggggss and Love
Sharon
The traffic here is horrible with the superbowl, so probably going to have a relaxing weekend myself.

I think it is difficult for some to understand that they were chosen...and truly grasp it. Some in fact are offended by the idea, thinking that it means that others are not chosen...I do not like to debate the doctrine of election, but I take God at His word and leave the inability to understand it ALL alone. If we can grasp THIS truth, how much we are loved and our position in Christ NOW, it frees us up so much to do so much for His kingdom. It has to go deep into the spirit...not just head knowledge...and WOW! Great scriptures in this post!

I love it Michele! We are so blessed that our Lord CHOSE us.

Thank you for sharing all of those beautiful scriptures with us!

It's so special to be chosen!!

have a blessed weekend my friend.

I am still amazed that He chose me and that as many times as I mess up, He still wants to keep me.