...who can not speak for themselves, for the rights of all who are destitute. (Proverbs 31:8)

If the Obama administration is successful in rescinding the "Conscience Clause" then many doctors will go to jail if they refuse to take the life of a precious baby.

Watch a video of Senator Tom Coburn who states: "I will go to jail before I perform an abortion."

President Obama said it. He wants to hear from you.

But he's given you a deadline: You've got two weeks to voice your concerns - to speak out for America's pro-life medical professionals ... and their moral conscience - before it's too late.

Right now, the Department of Health and Human Services is accepting public comment on this very critical issue - but the deadline is quickly approaching.

You have strong convictions, but President Obama says that doesn’t matter. He’s ready to rescind the Conscience Clause.

The Conscience Clause was implemented by former President George W. Bush to give physicians and nurses the choice to act according to their conscience — to not participate in abortion procedures if it conflicts with their personal convictions. If President Obama makes this damaging move, if he reverses the Conscience Clause, pro-life doctors and nurses will be forced into performing abortion procedures, despite their individual beliefs.

Remember, President Obama has only given us two weeks to act.
Thanks be to God, He made His children fast typers! ♥
Petition to Protect Pro-Life Doctors 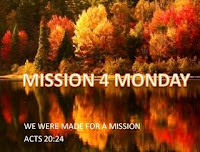 For other mission 4 Monday click here
Posted by Michele Williams at 1:57 PM

Hi Michele. Thank you for posting this! This makes me so sad!!!!!!

When I think this man can't make a more twisted decision ... argh.

Thank you for posting this Michele. I signed.

Thanks for sharing this.