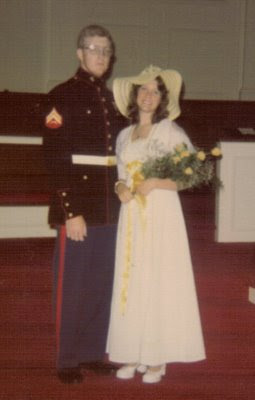 It is so hard to believe that it has been 35 years already! When Jim and I were first married, he told me that we will NEVER go to be angry. I have to say that it’s been true. We have had sleepless nights…yes… But we have made certain that even if we disagree about something, we will not go to bed angry. We will agree to disagree. We make sure that there are no harsh feelings. I would have to say that this one thing has made the biggest positive effect on our marriage. This one thing has caused us to talk instead of brood and stew over things. To coin a phrase from Barney Fife on the Andy Griffith Show, “Nip It! Nip It in the butt!”

My husband is my friend, confidant, mentor, companion, critic, cheerleader, fan, hero, home, my “north”, pastor, lover and love of my life! We complete one another. I cannot imagine my life without him.

Jim, Happy 35th Anniversary! In light of eternity it is just a flash! I love you sweetie!
Posted by Michele Williams at 3:07 AM

Email ThisBlogThis!Share to TwitterShare to FacebookShare to Pinterest
Labels: Family - My, Fun Things About Me, Marriage

May God continue to bless you marriage and be gracious to you both and make His face smile upon you. amen amen amen

Such a wonderful witness.

While the rest of the world seems to be giving up when their marriage vows require some effort, you are proving that it's worth putting in the work.

Wow! Happy, happy anniversary to you both. What a wonderful tribute to your marriage and to the One in whom your marriage is founded. May He bless you with many more incredible anniversaries together!

What a milestone today! Happy anniversary to you two lovebirds and may God give you many many more years of happiness.

Happy Anniversary dear sister and brother in love... but sweet sis, may I please remind you that you were married in 1974!!! Heather was born in 1976-the year between my girls.

Love you all! Have a great day celebrating each other.

Happy anniversary!!! What an awesome example you are in a time when people take their vows so lightly!!

have a wonderful day!!!

Yes, I just noticed that I had put 1976! LOL.... That's what happens when you write this when you are falling a sleep! I just can't seem to stay awake long enough at night to write a post! LOL... Must be this clean country air! I just want to go to bed early and sleep!

His grace is sufficient. said...

May God Bless You & Jim on your 35th Anniversary & always!

May God bless you with many, many more precious years together!

Happy Anniversary my friend. Wow 35 Years...that is awesome. We don't go to bed angry either.

oh how sweet. happy anniversary!!! God bless you and your family always.

I pray you'll enjoy many more wonderful years together!

Sweet blessings to you on your Anniversary, and always. I love you.