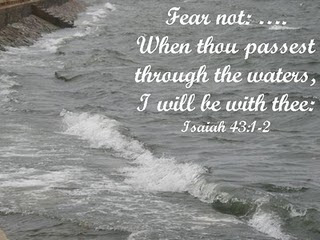 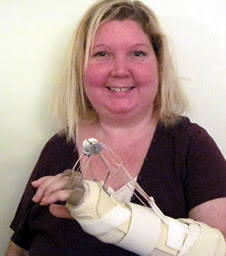 SB Wire- 8/9/12 – SAN DIEGO – National Invisible Chronic Illness Awareness Week kicks off awareness efforts by spreading anonymous notes around the USA and beyond that will bring encouragement to those suffering silently. Invisible Illness Week, September 13-19, 2010 is an annual event sponsored by Rest Ministries, the largest Christian organization that specifically serves the chronically ill.

When Lisa Copen, founder of Rest Ministries and Invisible Illness Week, had 4 joints replaced in her left hand during the winter of 2009 due to rheumatoid arthritis, she wore a scary looking outrigger splint for four months, 24 hours a day, that caught the attention of many people wherever she went. While some people awkwardly looked the other way, many approached her and started to share their stories.

you may be in invisible pain small note Press Release Invisible Illness Week Seeks To Encourage Through Anonymous Notes of KindnessLisa quickly realized just how many people are inwardly suffering silently and then when they saw someone who they thought could relate with their pain, they opened up and were willing to share. Many conversations ended with a hug and sometimes a few tears. She had also talked with friends about how, when she saw someone with an invisible illness getting out of a car parked in a handicapped spot, part of her wanted to go over and just say “I understand” but she was afraid how they may respond. She discovered other people with invisible illness felt the same way! 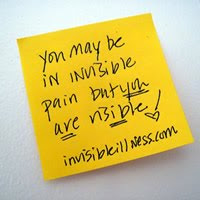 Copen shares, “Most people are not looking for large support groups or 100 percent understanding when it comes to living with a chronic illness. People in pain often times just want ONE person who really ‘gets it.’ And that one person can make a world of difference.”

Notes may say “If you are wondering if someone cares, someone does,” or “Your pain may be invisible, but you are seen! Hang in there!” and then followed with the web site invisibleillness.com.

National Invisible Chronic Illness Awareness Week, which Copen began in 2002, will make 2010 the year of “Each One Can Reach One.” Thousands of people around the world are participating by leaving encouraging sticky notes anywhere they think of, from bathroom mirrors and community bulletin boards, to inside of envelopes when they pay their bills.

With nearly 1 in 2 people in the USA living with a chronic condition such as diabetes, arthritis, cancer, or fibromyalgia, about 96% of illnesses are invisible.* The hope of the people involved at National Invisible Chronic Illness Awareness Week is to remind people that although they may feel like they are alone in their pain, there are people who do care and understand the unspoken language of invisible illness.

It is easy to get involved. Grab a pen and some paper and share some encouragement in just a sentence! Add invisibleillness.com at the bottom so those who find the notes nowhere to discover more encouragement and get involved too!

Bloggers and the patient community will be participating in additional ways including blogging about invisible illnesses and conditions and attending virtual seminars online during the week of September 13-19.

*http://invisibleillnessweek.com/media-toolkit/statistics/
Posted by Michele Williams at 2:38 AM

A great WFW ~ Praying for those with chronic illnesses ~ Blessings ~