From The Cradle To The Cross 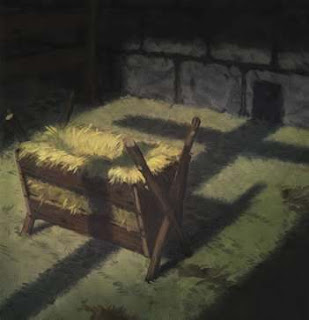 Over twenty years ago, my husband and I found a beautiful lighted cross to put on top of our Christmas tree. We would put our manger scene at the foot of the tree each year. The first Christmas we had the cross on the tree; Jim was sitting in his chair admiring the tree and said out loud, “From the cradle to the cross.” I look at him and stated, “What a wonderful message our tree has this year!” Well, not only did our tree have a message that year, but so did my preacher husband! He preached a sermon titled, “From the cradle to the cross.” I wish I had that message to share with you today, but instead you will have to read my ramblings.

For me, the message of Christmas is not just the birth of Jesus. It’s the birth of our Savior. It’s the birth of the Message Himself! The whole Message, not just in part. The wise men knew the whole Message; just read what they brought for a baby (Matthew 2:7-12). They presented Jesus with gold, frankincense, and myrrh. What kind of gift is this for a child? They realized that He was no ordinary child, no, they presented gold because He was a king; frankincense because He was God; and myrrh – a burial spice - because they knew the whole Message…What is the Message? “For God so loved the world that He gave His only Son, so that everyone who believes in Him will not perish but have eternal life.” John 3:16

The wooden manger that once cradled our Lord and Savior was replaced with an old wooden cross that held our Savior’s body as He shed His own blood for the sins of the world. Our Savior willingly left the portals of Heaven to be born of a woman to experience the joy and pain of this life so that we in turn can have eternal life in heaven with Him one day.

Yes, Christmas is a time we celebrate Christ’s birth, but let us not forget that this little babe was born to die for the sins of a world that would one day reject Him and crucify Him on the cross of Calvary.

I am eternally thankful that my God loved me so much to leave the portals of heaven to be born in a lowly manger some 33 ½ years later to be crucified on an old cruel cross for you and for me.

************************************************************
Scripture Reading:
Isaiah 7:14 All right then, the Lord himself will choose the sign. Look! The virgin will conceive a child! She will give birth to a son and will call him Immanuel – 'God is with us.'
Luke 2:12And this is how you will recognize him: You will find a baby lying in a manger, wrapped snugly in strips of cloth!
Isaiah 53: 1-12
1 Who has believed our message? To whom will the LORD reveal his saving power? 2 My servant grew up in the LORD's presence like a tender green shoot, sprouting from a root in dry and sterile ground. There was nothing beautiful or majestic about his appearance, nothing to attract us to him. 3 He was despised and rejected – a man of sorrows, acquainted with bitterest grief. We turned our backs on him and looked the other way when he went by. He was despised, and we did not care.
4 Yet it was our weaknesses he carried; it was our sorrows that weighed him down. And we thought his troubles were a punishment from God for his own sins! 5 But he was wounded and crushed for our sins. He was beaten that we might have peace. He was whipped, and we were healed! 6 All of us have strayed away like sheep. We have left God's paths to follow our own. Yet the LORD laid on him the guilt and sins of us all. 7 He was oppressed and treated harshly, yet he never said a word. He was led as a lamb to the slaughter. And as a sheep is silent before the shearers, he did not open his mouth. 8 From prison and trial they led him away to his death. But who among the people realized that he was dying for their sins – that he was suffering their punishment? 9 He had done no wrong, and he never deceived anyone. But he was buried like a criminal; he was put in a rich man's grave.
10 But it was the LORD's good plan to crush him and fill him with grief. Yet when his life is made an offering for sin, he will have a multitude of children, many heirs. He will enjoy a long life, and the LORD's plan will prosper in his hands. 11 When he sees all that is accomplished by his anguish, he will be satisfied. And because of what he has experienced, my righteous servant will make it possible for many to be counted righteous, for he will bear all their sins. 12 I will give him the honors of one who is mighty and great, because he exposed himself to death. He was counted among those who were sinners. He bore the sins of many and interceded for sinners.
Posted by Michele Williams at 6:00 AM